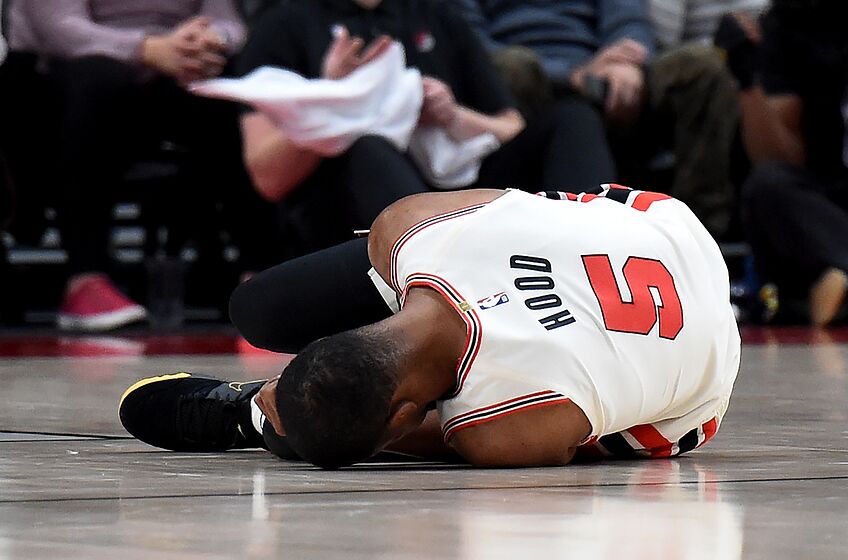 PORTLAND, OREGON - DECEMBER 06: Rodney Hood #5 of the Portland Trail Blazers lays on the court after being injured during the first half of the game against the Los Angeles Lakers at Moda Center on December 06, 2019 in Portland, Oregon. NOTE TO USER: User expressly acknowledges and agrees that, by downloading and or using this photograph, User is consenting to the terms and conditions of the Getty Images License Agreement. (Photo by Steve Dykes/Getty Images)

Former Utah Jazz player Rodney Hood has suffered one of the most devastating injuries in basketball, a torn Achilles tendon.

Although Rodney Hood‘s time with the Utah Jazz was somewhat polarizing due to his constant struggle with injuries, his streakiness and his sometimes irritating play, I don’t think any Jazz fan really held ill feelings towards him after he was traded. Despite some potential perceived faults, Rodney always worked hard, was a good teammate and did have some great moments with the Jazz, especially for a late first-round pick.

Despite some frustration in Cleveland, Rodney had finally started to look as if he’d found his way in Portland. He was sensational last year in the playoffs, had an all-new demeanor as if a former weight had been lifted off his shoulders and appeared to be a great fit for the Blazers both on the court and in the locker room.

To start off this season, he had been one of the most outstanding bright points for a Portland squad that is off to a rough start. In fact, you could make the argument that Hood was having the best season, or at least the most efficient season, of his career. Through Friday night, Hood was shooting an incredible 50.9 percent from the field and a scorching 49.3 percent from deep. Those are marks that Jazz fans pined for him to shoot while he was in Salt Lake City.

But unfortunately, in heartbreaking fashion, Rodney Hood’s 2019-20 season (and perhaps more) came crashing to an end in Friday’s bout against the Los Angeles Lakers. Late in the first quarter after collecting a rebound, Hood collapsed to the ground in evidently severe pain. Later that evening, it was announced that the fears when the injury occurred were confirmed.

Hood had torn his Achilles tendon.

This injury has quickly become one of, if not the most detrimental injury in basketball. It essentially was the domino that sent Kobe Bryant into retirement. It was the same injury suffered by Kevin Durant that will keep him out for the entirety of this season. It’s one that players rarely are able to come back the same from.

The fact that it happened to such a good guy in Rodney Hood who had been having such an outstanding season is just heart-wrenching, and even more so for a former Jazzman who is still very much beloved by many in Utah.

What’s worse is that apparently Hood expressed that he was having Achilles soreness previously and it caused him to leave Portland’s game on Wednesday. Although he cleared all the proper protocols to play Friday, it’s still a bad look for the Blazers training staff that just one game removed from his supposed ‘minor injury’, he would suffer a catastrophic injury where the pain had existed previously.

Terry Stotts says Rodney Hood cleared all the protocols to be cleared to play tonight after leaving Wednesday night’s game early with Achilles soreness. Nobody thought it was serious.

In other words, at this point it might be safe to say that any Achilles discomfort is likely far too risky to simply overlook.

The fact of the matter now is that Rodney Hood will face a long and grueling path to recovery, and it’s truly a shame that this had to happen to him. It will now be some time before we see him back on the basketball court, and I think I speak for all of Jazz Nation when I say that we wish you well, Rodney.

Next: Game thread: Can Utah Jazz finally make a statement against the Memphis Grizzlies?

Here’s to a speedy recovery for the former Jazzman in hopes that he can get back to knocking down shots with ease soon in the way he had been doing during the start of the 2019-20 season.